Vast majority of Seattle voters say they would back fundraising measure to speed up ST3 :: NPI’s Cascadia Advocate 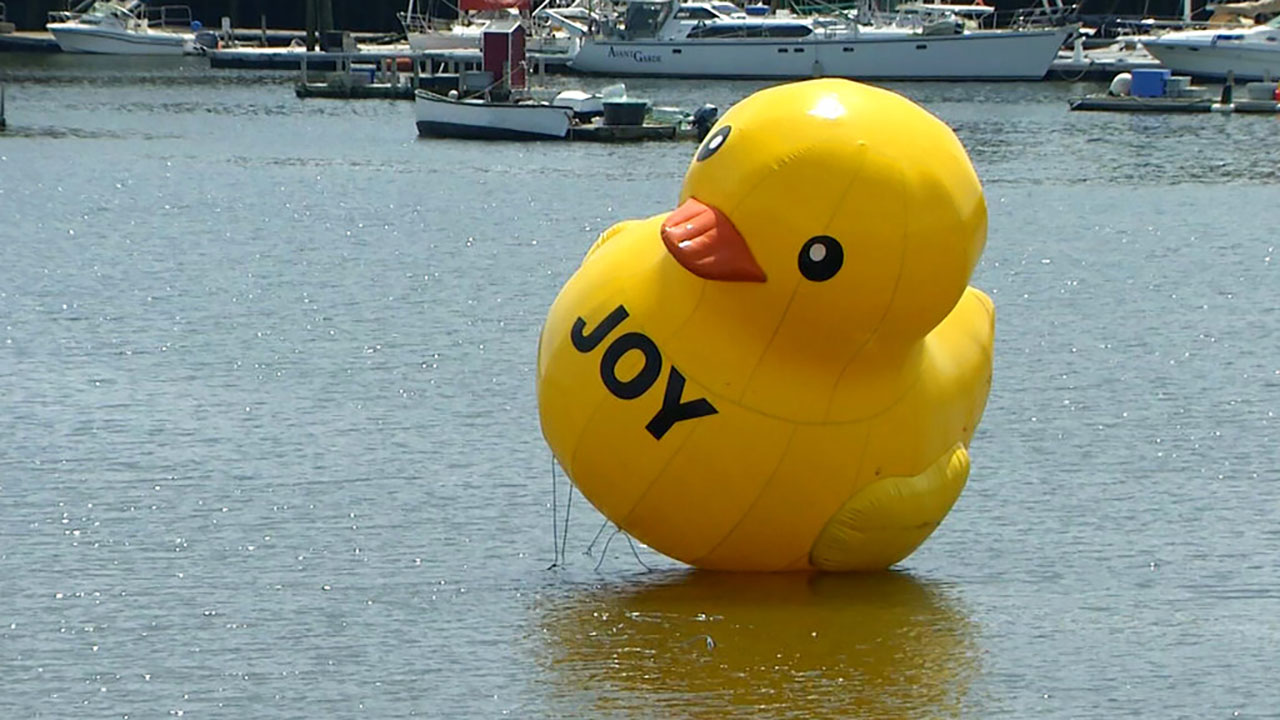 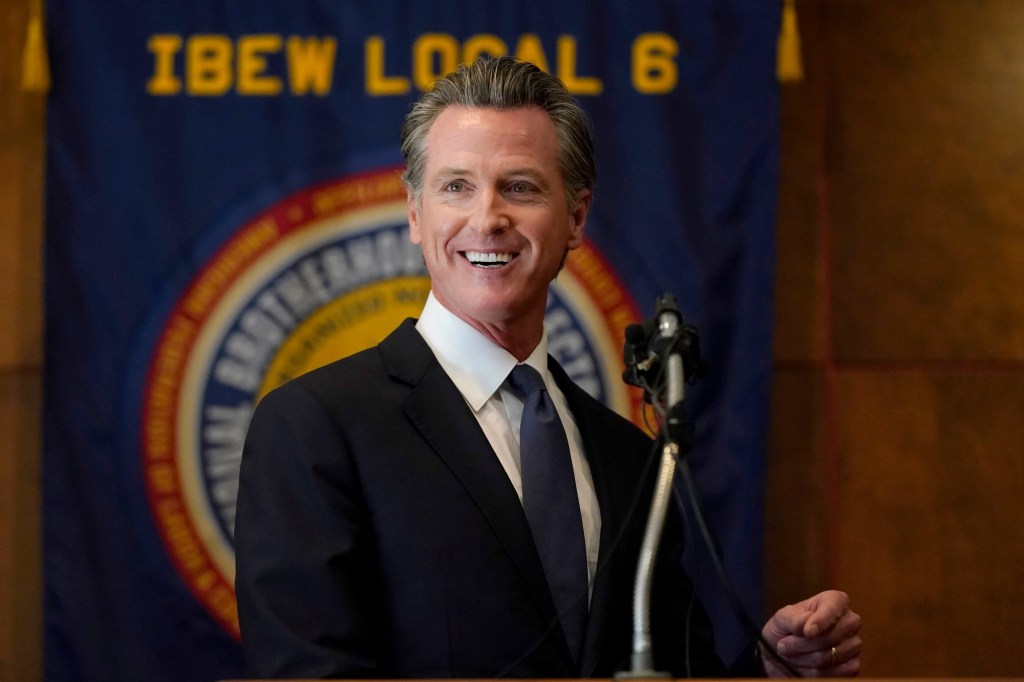 Almost five years ago, voters in Puget Sound said yes to an ambitious but much needed plan to expand high-capacity transit in the Seattle-Tacoma-Everett metro area. Known as ST3, short for Sound Transit Phase III, the plan allowed expansion of the Link light rail in just about all directions – north, south, east and west – as well as extensions of the express bus service, commuter train service; and the creation of a new bus rapid transit system.

Now, as Sound Transit grapples with a funding shortfall caused in part by the COVID-19 pandemic and rising land and material costs, NPI finds that Seattle voters would welcome the opportunity to provide additional financial support to ST3 so that projects can be accelerated. instead of being delayed.

View the results of the NPI survey on the acceleration of Sound Transit 3 projects (Graph by NPI, click to enlarge)

This discovery is great news for anyone who cares about making public transit accessible to everyone. It also comes at a critical time for the ST3 system expansion plan.

That’s because on Thursday, Sound Transit’s board of directors is due to meet and vote on a proposal that would officially recognize the agency’s financial issues and project management challenges and respond to them by sanctioning delays in them. ST3 projects, including new tram lines to Ballard. and West Seattle and new filling stations on existing lines.

This “rebalancing” proposal and the process that underlies it are collectively called by the agency realignment.

People and organizations who campaigned for ST3 including NPI, Seattle Subway, Sierra Club’s Cascade Chapter, The Urbanist, Transit Riders Union, TCC, Disability Rights Washington, and other members of the MASS Coalition have asked Sound Transit to avoid sanctioning delays of ST3. projects and instead find ways to build them on time or even ahead of schedule.

Climate damage has already turned catastrophic, as our recent heat wave has shown – hundreds of Cascadia residents are believed to have died as a result, according to preliminary figures from Washington, Oregon and the province of British Columbia. As the climate crisis worsens, it is imperative that Washington invest as quickly as possible in clean multimodal transport infrastructure, including all electric buses and light rail, capable of moving large numbers of people with zero emissions. .

Since the lack of available funds is the biggest hurdle Sound Transit faces in delivering our voter-approved ST3 projects, we and our friends at Seattle Subway decided to team up ahead of our survey last month to lay a claim. question to Seattle voters about their will. to support a city-level voting measure to speed up delivery of new stations and tracks within city limits.

These projects, like the second downtown transit tunnel, are among the more expensive elements of the ST3 plan, in part because they would serve dense neighborhoods that are already developed and require tunnels or overhead lines.

As mentioned, we have found that voters are extremely enthusiastic about an electoral measure to speed up the completion of the projects they voted for.

Here is the exact question we asked and the answers we received.

Note that the card you see below was shown to respondents without the NPI and Seattle Subway logos, and the card’s credits. As this version of the card is for sharing and public release, it has our logos and a card design credit. Thanks to the amazing Oran Viriyincy for making this card for us!

QUESTION: The Sound Transit 3 LRT expansion projects inside Seattle shown on the map below may be delayed from opening to the public for several years after the original project’s completion date, mainly due to financial deficits. Would you support or oppose a new transit funding measure to speed up construction of the current ST3 light rail expansion projects in Seattle? 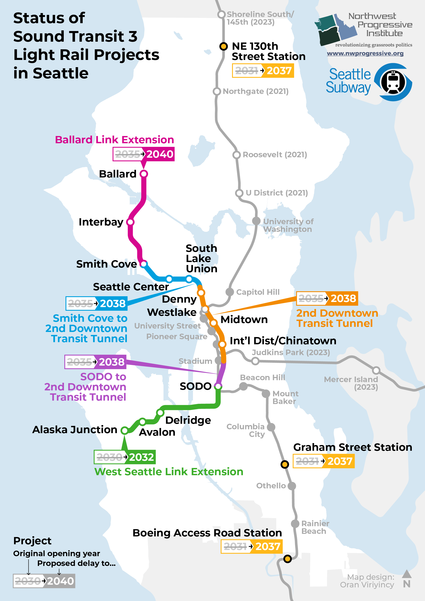 Our poll of 617 likely August 2021 voters in Seattle was in the field from Monday July 12 through Thursday July 15. All respondents participated online. The poll was conducted by Change Research for the Northwest Progressive Institute and has a modeled 4.3% margin of error at the 95% confidence interval.

The project delay dates you see on the map above all come from the realignment proposal from Sound Transit board chairman Kent Keel, which you can read in detail on The Urbanist. (NPI management met with President Keel at the end of June to voice our organization’s concerns about the sanctioning delays of ST3 projects.)

In total, more than two in three Seattle voters said they strongly or somewhat supported a new transit funding measure to speed up construction on current ST3 light rail expansion plans. Those who are strongly supported outnumber those who are in opposition.

The intensity of support did not surprise us, given that Seattle has long supported public transport in the poll. But it was still great to see. (The people of Seattle wisely and consistently voted in favor of Sound Transit’s expansion plans and against Tim Eyman’s initiatives to sabotage them.)

The lesson to be learned from this poll is that voters in the Emerald City are very, very willing to invest more to get a faster return on the transit expansion they voted for five years ago in the 2016 presidential election.

It’s time for courageous and imaginative leadership… time for climate action and resourcefulness. We know austerity is disastrous and costly. The reality is that ST3 projects will never be cheaper to build. The sooner we can build them, the more profitable the Sound Transit 3 will be.

The Sound Transit Board, Seattle City Council and the Washington State Legislature should give Seattle voters the ability to accelerate the largest and most complex ST3 projects by allowing new forms of incremental revenue as the city ​​can perceive to strengthen the expansion of public transportation that Seattle badly needs. .

While the Sound Transit Board realignment exercise is expected to end on Thursday, the most significant opportunity for action will be in the coming weeks, at the state level as opposed to the metropolitan level.

That’s because Gov. Jay Inslee plans to bring the Washington State Legislature back into session to work on creating a new transportation package.

A special session to this end is a great idea, but it is imperative that the legislature makes climate and multimodal transit infrastructure the focal point of any legislation it passes. We cannot afford another set centered on the highway.

We need to rebuild some of the crumbling bridges in our highway system, like I-5 over the Columbia River, but we shouldn’t add new lanes to the network. Emphasis should be placed on other modes that usually only get scraps: ferries, buses, trains, cycle paths and sidewalks + paths for pedestrians and riders.

Most of Washington’s transit systems are funded with locally or federally guaranteed dollars. Lawmakers need to spend more dollars at the state level on public transit and also give Seattle the opportunity to partner with Sound Transit to get increased financial support for these large ST3 projects in the city.

There is precedent for this.

A few years ago, Seattle voters had the option of funding Metro bus hours of service with city-level vehicle charges. They said yes, and the city has started an extremely successful partnership with King County Metro which has provided the city with more and better service than with county dollars alone.

Now, our poll shows Seattle voters would be happy to be able to keep ST3 on track with a transit funding vote measure.

Since cities only have the fiscal authority that the state gives them, it is up to our state legislators to act. However, members of Sound Transit’s board of directors have a role to play in this regard: they can and should lobby for the required legislation to be part of the transportation agenda adopted by the legislature.

Climate-conscious Democratic majorities control both Statehouse and Governor’s chambers, so this should be achievable.

We, Seattle Subway and the MASS coalition will do our part.

The future of our region and our planet is at stake. We cannot afford to wait until the 2030s and 2040s to cut the ribbon on the essential projects that we authorized in 2016. We must work together to accelerate them. deadlines and bring high-capacity transportation to more neighborhoods as quickly as possible.